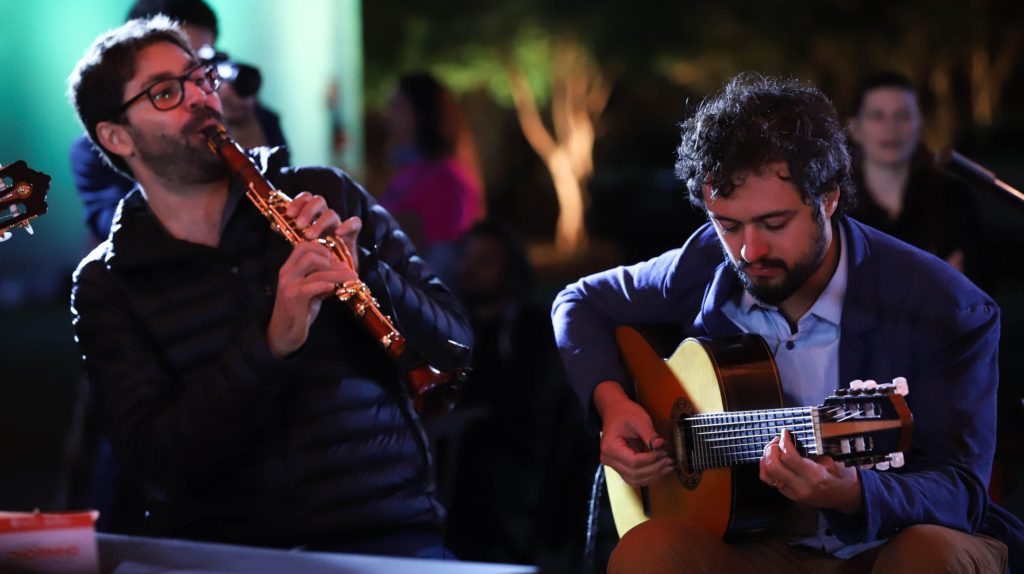 A 2019 musical tribute to renowned choro composer Jacob do Bandolim, on the 50th anniversary of his death in São Paulo, Brazil. © Image credit: Governo do Estado de São Paulo / CC BY 2.0 (https://creativecommons.org/licenses/by/2.0)
News  >  Research and publication

In this article, originally published by EPFL and the EPFL College of Humanities, dhCenter member Fabian Moss of EPFL’s Digital and Cognitive Musicology Lab (DCML) describes how he and his colleagues have used data science and statistical techniques to characterize the musical style of choro, a primarily instrumental genre from Brazil, for the very first time.

Their study, which was recently published in the Journal of New Music Research, identifies key stylistic traits from some 300 pieces of choro music, providing an unprecedented empirical analysis of the harmony and form of the genre, which emerged in 19th century Brazil and is still popular today. Derived from the Portuguese word for cry or lament, choro music nevertheless has an upbeat sound, and over the years has become blended with other musical genres including jazz.

The inspiration for the study came from DCML colleague Willian Fernandes Souza of the Federal University of Rio de Janeiro in Brazil, himself a choro musician and expert. He brought his knowledge of the genre to the study, while lead author Fabian C. Moss, a postdoctoral researcher in the College of Humanities, brought his experience in corpus research and data science.

Moss is also the first author on a similar 2019 paper that focused on Beethoven’s string quartets. However, he notes that the new research represents a chance to analyze music outside the traditional canon usually studied by musicologists.

“We received some criticism on the Beethoven paper to the effect that enough has been written about Beethoven. There are good points to this criticism, as such studies often confirm inherent biases in our field, like that of ‘dead, white, male’ composers as musical masters or geniuses,” Moss says.

“This choro dataset lies outside of the core musical canon of composers that are traditionally studied, and we think that doing more research on peripheral and unstudied genres is very important to understanding what music is as a whole.”

The researchers transcribed some 300 pieces of choro sheet music from the late 1800s to early 2000s, chord by chord, into a machine-readable format that could be used for algorithmic analysis. Through this analysis, they notably discovered that patterns of chords and keys in choro pieces appear to be very different from those in other musical genres that have been studied quantitatively, such as classical music.

“The rules of harmony that define the style are very different at the local, or chord level, and at the global, or key level,” Moss explains, adding that in classical music, these two harmonic levels would be more closely aligned.

The reason for these differences in choro is beyond the scope of this study, and Moss says it’s a question they’d like to pursue in the future. However, he speculates that it may have something to do with the improvisational and collaborative nature of choro compared to classical pieces.

“Choro is more popular, street music, and the notation is not as elaborate as in classical music. The chord and key patterns we see may make it easier to pick up a guitar and participate in a choro performance and intuit what comes next. Choro is not simpler than classical music, but for an interactive setting like this, the complexity must lie elsewhere than in the harmonic progressions.”

The researchers also noticed that the chords themselves have changed over the past 150 years. Whereas three or four notes were once played simultaneously to produce a chord, over time, chord extensions – which bring five or six notes to a chord – became much more frequently used, especially after the 1950s.

“This was a really cool and completely new finding. We believe that this increase is due to the influence of jazz on choro, but we would need to do further research to confirm this,” Moss says.

A more precise approach to musicology

Moss says he hopes the work will lead to follow-up studies, and emphasizes that their dataset is freely available online for use by other researchers.

He adds that he believes these kinds of empirical, quantitative studies of music are essential, not only because they are more efficient than manual studies – “using computational methods, you gain a more complete picture more easily,” he says – but also because they can help improve the discipline of musicology itself.

“If you take a traditional music analysis text, you will find that concepts, like keys, are often vaguely or not at all defined. Computational approaches force researchers to be precise about the methods they apply, and being forced to quantify things helps you think more clearly about what you are studying.”